Promoting Science in a Wired-Up World 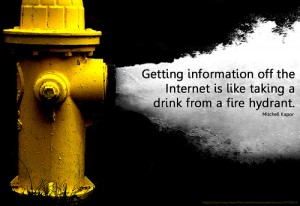 As many of you will probably ask this question: why are you blogging about promoting science… we thought we’d answer it straight away. The world of science (communications) is changing, there is a scientific information overload and the reality is now more about who shouts loudest rather than who has the best scientific discoveries up their sleeves. Read on to find out what we’re talking about.

Back in October I found myself wondering out loud why science journalism can sometimes resemble a game of chinese whispers. You know, the story cycle starts by talking about new apple varieties and ends with proving sheep (Uh??).

It all seemed to come down to one thing: journalists writing stories on science discoveries they don’t really understand because they haven’t actually read the scientific paper and have just quoted the press release or their competitor outlets because they couldn’t possibly be seen to have not reported the same thing as the competition because there is this unwritten rule that science news coverage must be stage managed and homogenous across all outlets except blogs were all the interesting analysis takes place because it’s written by scientists who actually understand the science, don’t care for rigid academic procedures and peer review of scientific discussion and just want to get their qualified opinion out to the public (and breath).

Since that time, it seemed like a good idea to find out why this state of affairs exists and what is being done about it. The motivation is quite simple. 24 Media Labs is a nascent science communications agency run by scientists for scientists. If we are going to help scientists communicate their science to the wider world we’d better know how to do it (don’t worry, we have figured that bit out) and especially in the wired world of the internet. This blog is the place where we will share our adventure, discoveries and thoughts on how to manage in this new reality.

Our brief peak under the bonnet (a.k.a. market research) has so far revealed a fragile system of information flow that is build for a pre-internet age, that is overloaded and is only slowly changing for this new wired reality. We will document all this evidence in the coming weeks and months. Is the system broken? Not yet, but it might well be on the edge. Some thoughts which we will elaborate on in the coming months:

Summary: Systemic information overload (which we will present on this blog) means that scientists need to be creative, opinionated, loud and entrepreneurial to get heard by the media and by the public. As a scientist, you may well have the biggest scientific discovery to date, but to get heard above the information noise and on a changing media landscape, you are going to have to shout very loud indeed.

Our aims: This blog will document as many ways as we can think of to promote science in the new wired reality. We’ll also need your help to highlight new ways of promoting science and success stories of the day. We’ll cover traditional methods of promotion and more modern approaches. We will document, discuss and challenge all the different ways scientists are using to promote science and we will wonder out loud about the state of the media and what can be done to fix it.

Joining us for the adventure?

Tagged with: Journalism • Media • Promoting Science
If you enjoyed this article, please consider sharing it!

Bad Behavior has blocked 12 access attempts in the last 7 days.