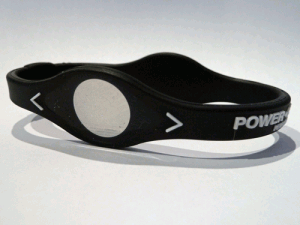 Pseudo-science can sometimes teach us a few things about communicating real science – particularly when it gets a proper chewing from a government agency and a bunch of  journalists. We take a look at Power Balance and what they are doing to protect themselves from a good dose of negative attention. It’s all a bit ugly.

Have you heard the one about a wrist band with a hologram that can improve your balance, strength and flexibility? Evidently Club Celeb has. Spotted recently… the England Cricket Team, the Dutch Football Squad (oh is that why they did so well in the World Cup?), a future queen, a bunch of actors and David Beckham… all wearing Power Balance bands.

What are they claiming?

Power Balance claim that their hologram-containing wristband is designed to “resonate with and respond to the natural energy field of the body”. We’ll leave you to make a judgment about what that really means.

It’s apparently enough for the celebrity world. They have a LOT of celebrities, athletes, and other sports stars endorsing the product claiming that it helps their balance, strength and flexibility. In industry speak that is known as indirect marketing and it looks like they have made a real effort to encourage this.

How does the product work?

Now, we are not about to debate the merits, or otherwise, of the scientific evidence behind this product (trust us, we could). Plenty of others have (here, here and here) and unless there is some secret scientific literature only available to celebrities and this company, we will errr on the side of caution, agree with the critics, wait for clinical studies to be published, and side with the Australian Competition and Consumer Commission (ACCC) who, this week it emerged, have completely rubbished any credibility this product might have had.

We also note that the BBC have commissioned some actual scientific research on this and they report (journalist-style) that the product is no more effective than a placebo. For our part, we do encourage the researchers and the BBC to publish this study in the normal channels (i.e. via a peer reviewed scientific journal).

How are they talking about it?

What is interesting about this story is Power Balance LLC have openly admitted in Australia, that they have no scientific evidence to support any claims that they, or others are (still) making about their products and that they engaged in misleading conduct.

That, is very very rare indeed.

You will normally see companies fight tooth and nail to defend their products even in the face of overwhelming evidence against them and/or their products’ claims.

To their credit, they equally claim that they are working very hard to re-dress all “marketing errors”. Fine. But, that is a brave assertion for a company with one offering who rely on a myriad of celebrity supporters claiming miracle things as a result of using their product.

The point to watch though is how they are talking about the product in other countries around the world. Let’s take the US. According to a statement from the president of Power Balance LLC, Keith Kato, “Power Balance has not made a statement that our product is ineffective. This is simply untrue.” In the UK, there is a similar statement and here it is in Belgium. On Facebook there is a very simple assertion: “Power Balance works we guarantee it.”

They claim they do have evidence that their product is effective (para 5 – accessed 8th January 2011). For the sake of posterity, here is the US press statement where they say that “a preliminary study, conducted by an independent third-party, was recently commissioned to determine the different performance variables of the product and the findings have determined that wearing the product does in fact provide a “statistically significant” result on the wearer’s performance.” (quote taken from here 8th January 2011 but check this post to get a balanced view).

Now we’re talking. What they need to do is publish this data quickly. It might well help them save their credibility, business and defend themselves in a class action law suite that has recently appeared in the US.

Power Balance is apparently a $35 million dollar business and we’re left wondering whether it will be worth anything at the end of 2011 (maybe after the lawyers have had their turn).

What can we learn in terms of promoting and communicating science?

Power Balance LLC might have celeb status endorsement but they are going to have to be really clever in 2011 in dealing with continuing criticism from the press, government and the courts and keep a business going around it. We think there will be some lessons to be learned this year in terms of communicating a “scientific basis” of a product… or not. We will see.

Prize draw: If you can prove scientifically in a peer reviewed journal that the Power Balance band can improve balance, strength and flexibility you will be the proud owner of a shiny new power balan… answers on a e-postcard please.

Tagged with: Claims • Communications • Scientific Evidence
If you enjoyed this article, please consider sharing it!

Bad Behavior has blocked 22 access attempts in the last 7 days.